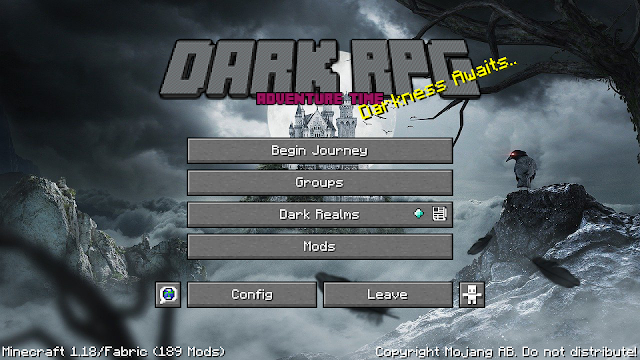 This update brings some much needed fixes to DarkRPG. View full article for more information.
1.18.2 Version will be released when most mods have been updated to 1.18.2. For now we will stick to 1.18.1.

Version 2.0a
- Updated all mods to latest versions
- Fixed invisible wolves (removed better dogs pack)
- Added Better Beds resource pack (we have 3D pillows now, yay!)
- Fixed quest items and spellings (remember to press [i] or view quest book for quests)
- Quests: You can now gain 2x Orb of Origins. First one is in the easy quest chain. Second is in the Extra Quests chain. The orb can be used to change your origin and classes in-game.

Version 2.0
- Major Update
- Updated All mods to latest versions
- Updated Fabric version to latest
- Revamped the Questing system. Open the Quest Book or Press i to open the quests page. Choose from the left side menu for different quest categories(easy, hard, etc). Click into each quest icon to view its requirements. Once a quest is complete, you can click its icon for the rewards or use the right-hand-side icon to grab multiple rewards.
- New Quests will be added later in major updates.

Version 1.7e
- Added Villager Names (see screenshots in Images section)
- Spawn point set to Villages. You will now always spawn inside or near a village in a new game
- Worlds will generate much quicker now
- Tweaked Crosshair
- Tweaked REI menu and made it much neater

Version 1.7a
- Added Animals mod
- Starter gear now includes a bow and arrows
- Swapped Coral blade with a Katana.
- Added backpacks. Open as normal and store items into it.

Version 1.7
- Updated all mods to their latest versions
- Added Vampire origin, choose vampire on a new playthrough (shift+right click to siphon from enemies).
- Added Magic Wands mods.
- Changed starter weapons. The Hawkbrand is no longer usable from start. Instead, you will get a magic wand, an empty mana flask, and a Magic spellbook. The rest of the spellbooks will have to be discovered as you play. Read the book to learn the spell and fill the flask by sneaking with the flask. Perform the spells with the wand to attack. Coral Blade is also included in the inventory to balance the game. You can swap between Coral Blade and Wand to have a battle mage playstyle (or craft your own weapons).
- LambBetterGrass mod was removed as it was not compatible with the latest version of Fabric.

Version 1.5e
- Added Companion Bats (equip from action bar, Shift+click on bat in action bar to see its details)
- Added Bundle mod (equipped to bat and will pick up items for you)
- Updated a few mods to the latest versions
- Changed starting items (Now equips a Sword by default, several books, and bat items added).

Upcoming changes to be done in future releases:-
- Mod updates when they become updated.