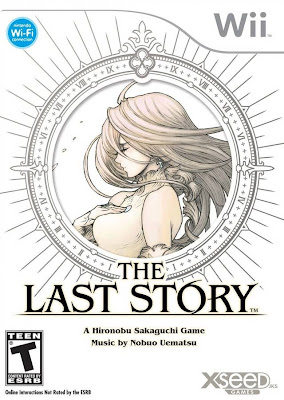 Having recently played this in HD on the Wii U, there are so many things wanting this to not be the last story.

The Last Story was released on the Wii console in Europe in February 2012. Some consider this game to be among the top RPG games ever made for the Wii generation.

Having never played this on the original Wii console I got my copy just in time to play it on my recently bought Wii U console. The benefits of playing Wii games on the Wii U console are that the games are all in HD so we can enjoy sharper graphics in high definition.


The game was directed by none other than Hironobu Sakaguchi who is the creator of Final Fantasy. From learning this fact one can assume there will be good things to follow in the game.

We can play this using the classic controller on the Wii but I played it using the default wiimote and nunchuk. Don't worry though there won't be any swinging or dodging required for this game as it plays like any other normal controller based game.

The game starts off with a number of tutorial screens and the game showing us the ropes and how to control the characters in battle. At first it can be confusing as to who we really are controller because it switches from one character to another. After the tutorials we get to learn that the main character of this story is Zael. A mercenary with goals of one day becoming a Knight. Zael currently works for a group of mercenaries led by a character named Dagran.

The primary story in the game involves Zael obtaining special powers which he can activate during battles and revive characters if they have been KO'd. He can also initiate battles from special spawn points to gain experience at certain points using his given special power. Then enters Calista who is a princess who has run away from the castle and joins up with Zael and his gang taking part in killing off strange types of monsters throughout the land.

The game itself does not offer any free roaming exploration as such. Instead we are given chapters and approximately there are 40 of them. Each chapter means there is going to be new areas and new monsters. During each chapter we are given resting areas where we can talk to various characters, buy items in shop and upgrade weapons and armor. This method works quite well the way they have executed it, although it would have been nice to have more places to explore.

The armor system is also nice as we are allowed to switch gears at any time and wear other party member's items. Meaning one moment we can have Zael wearing Heavy armor and another he can wear another party member's light armor. There is also a party auto-equip option which saves a lot of time.  Another bonus is that we can dye the armors to a variety of colors that we want. I went with all black on all the characters as it looked cool but once can go with any color they desire. Also worth noting is that when we upgrade armor it shows it on the characters so making a piece of armor or weapon powerful with show on your character eg. glowing swords, thicker armors.

Another interesting part of the game is its combat system which can be said to be unique in ways compared to other games in the genre. In The Last Story we are given the option of having the character auto-attack when it stands next to an enemy and we are to use strategic methods such as hiding under cover and then leaping out and doing surprise attacks which offer much more powerful hits. This method of combat is quite fun at the start but slowly becomes repetitive.  Around chapter 20 I was wishing I can just press a single button for my character to swing at the enemy and take them down quickly.

While the game starts off with a great premise and nice story it slowly becomes stale. The story after a while lingers on with the whole emphasis placed on the relationship between Zael and Calista. It is during halfway the game starts to become dull and loses its spark which is a shame as it starts out with guns blazing.

Overall The Last Story is a great game to own and play on both the Wii and Wii U. Apart from its short comings in the story department and occasional frame rate drops during high graphical areas the game is fun regardless. Definitely worth a buy!
Labels: Reviews RPG Wii Wii U