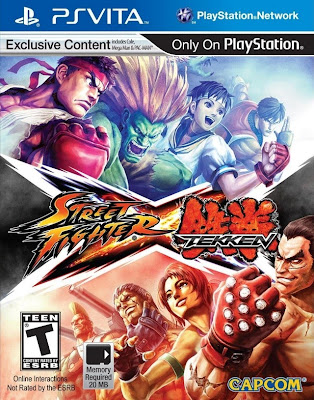 The ability to play our favorite Street Fighter and Tekken characters on a handheld sounds awesome!

Street Fighter X Tekken is a fighting game (in case you didn't already know) which features characters from both the Street Fighter universe and the Tekken universe.  For a long time both these two games have been rivaling each other in terms of being the favorite game among fighting game fans, but now they have teamed up to give what fans have been craving for all this time.  The real question that needs to be asked is whether or now this mash-up will really work or not.

First we need to establish that both the games Street Fighter and Tekken use a different type of fighting mechanism. If you have ever played Street Fighter in an arcade you will know about the quarter circle up + punch signature Ryu move. Whereas in Tekken the moves can be a little different.

However that should not discourage players from playing this at all. Firstly the game gives us a large variety of characters to choose from. All the fan favorites such as Ryu, Jin, Ken, Paul, Yoshimitsu, Blanka, etc.  There are also added characters on the Vita version such as Megaman and Pacman, which do not resemble their named characters as we would imagine but still are fun to try out.

The game uses a tag-like system where we can select two characters and swap between the two in battles. This makes sense seeing as we are playing a mash-up type game. You can use the rear touch area of the Vita system to do the character swaps as well as special moves.

The game options give us the function to assign touch screen controls both front and back for special moves. This is in theory a nice idea as it makes it less stress full trying to pull off moves on the Vita D-Pad but it has its drawbacks. For example often types I would find myself either switching between characters or doing moves I did not want to perform. The science behind this is that the most comfortable way of holding the Vita that I found was with the last three fingers of each hand on the back resting from both sides onto the rear touch screen. If you are playing for longer hours this factor gets un-noticed and then mistakes are made. If you are keen on making sure you do not make such errors it would be advisable to practice holding the Vita from both sides and as far wide as you can.

A new feature that the game introduces is the Gem system. At first it can be a little confusing as the Vita does not come with a proper game manual but after playing the game for 30 minutes one can figure their way around it. The gems offer more flexibility in our characters. There are various types of gems to choose from such as Attack, Defense, Speed and much more.  Using a specific gem will allow special bonuses for your character in battle. For example using a fortitude gem can nullify some of the damage your character takes at that specific time. All of these are even more useful when playing online.

The game allows us to battle players from all over the world. Similar to Street Fighter IV style we are placed in a lobby where we can either search for individual games, create our own or let the device choose the best match for you. The game offers cross play between both PS3 and Vita owners. This means you can be sat in a Coffee shop and playing another player over wifi who happens to be at their home somewhere else in the world. The downside can be that you are stuck using the Vita D-Pad while they are busting some moves using their Fight sticks. Anyway it is still fun to go online and battle other players to get ranks.

I was playing via wifi using a 10mbs connection but still noticed lag with other players, especially in the cross play battles. For some reason there were not many Vita players out there so I had to manually select fighting against ps3 owners. If wanting to play online make sure you have a decent internet connection as the slightest lag can cost you your victory in battle.

Overall Street Fighter X Tekken is fun game to own on the Vita system.

If you are a fighting game fan and own a Vita, then buy this game!
Labels: Fighter Reviews Vita