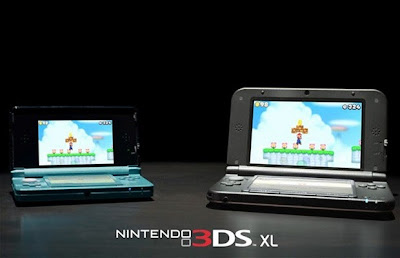 The 3DS console was the superior upgrade to Nintendo's previous console known as the DS. Similar to the original DS, the 3DS also comes in an XL size. We take a deeper look into which 3DS (original 3DS vs 3DS XL) is the best.


At first glance the most obvious choice one would make is that the XL is the better option, as it has the bigger screen (right?).

Lets start with the original 3DS first.  The 3DS was a nicely built handheld console. It felt great to hold in the hand with its glossy feel and premium quality build. At the time of release there was not much complaining to do in terms of screen size as it was the first console to show Nintendo's 3D function in action.

Similar to the dimensions of the original DS, the 3DS could easily fit into a jean's pocket or placed into a rucksack side pocket with ease. With the hard shell and decent hinge structure there was not much concern for the device getting damaged. A 3DS case also did the trick but could obviously not fit in one's pockets.

The 3DS XL was released shortly after (similar to pattern of the DS XL) and at first there were some noticeable minor differences between the two devices.

Firstly the stylus in the 3DS was placed at the back. This was sometimes troublesome to quickly whip out as one had to actually look at the back to see what they were grabbing. This was fixed in the 3DS XL as it is placed on the side so could easily be taken out.

Then the Start and Home buttons were made into proper buttons on the 3DS XL, whereas on the 3DS it felt more flushed within the area and was not raised.

The headphone jack was also moved in the 3DS XL from its original place.

Another noticeable difference was that the 3D led was removed in the 3DS XL. Not that it made any difference to the performance of the device.

Finally we come to the major difference between the two devices and that is the screen size. Upon closer inspection of the larger top screen size it becomes apparent that the bigger screen is more pixelated than the smaller screen. This is understandable as the screen has been enlarged but we were left disappointed that Nintendo did not increase the resolution of the larger screen. Had they have increased the resolution we could have enjoyed the bigger screen with a much higher level of clarity.

The bottom screen also faces the same pixel density problem was the top, however both screens are enjoyable with their bigger size and after a while it becomes unnoticeable.

Being an XL model it can (somehow) fit into various pockets if that is what you wish to do, but it is advisable to carry the 3DS XL in a carry case.

Comparatively the 3DS XL is nice console that offers a larger screen to enjoy all the 3DS games on (Fire Emblem on the XL looks nice). If you are conscious about portability and are mobile alot then it is advisable to go for the original 3DS.
If you do not mind carrying your portables in a carry case and/or are not that mobile then go for the 3DS XL. There is no definite winner in this case between the two as each have their favorable and adverse points to consider.
Labels: 3DS Reviews