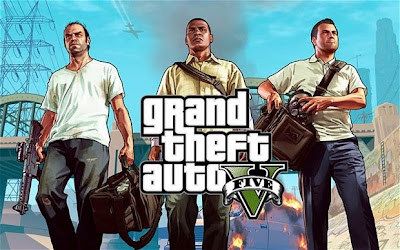 With the anticipation of GTA 5 being released in a few days, here are my first impressions of what I have seen so far.


Graphics: The graphics seems to be similar to that what we saw in GTA 4. This is to be expected seeing as this game is also on the same generation of consoles. The trailers and some in-game footage that Rockstar has provided does indeed show the game to be superior in some places when compared to GTA 4. These areas include:- water reflections, car reflections, character models (being more cartoon-like and shaded), texture smoothness.

Gameplay: The gameplay also looks similar to that of GTA 4.  The one problem I had the most with GTA 4 was the way the character was handled and driving. The character had movement acceleration which meant it took a buildup of speed to get to maximum speed when running. This completely ruined the fun which we had in previous games such as GTA 3 and Vice City where the character was running endlessly. Even though the method used in GTA 3 and Vice City was less realistic than what they went for in GTA 4, it still felt more fun.

Story: The story they have shown so far seems to be again taking itself too seriously. In the past Rockstar had a charm with the previous GTA games (GTA 3, Vice City, San Andreas). It was serious but not too serious (if that makes sense). In GTA 4 it was slightly more realistic and by playing it the first time, it was overlooked simply because the game was out on a new console and people were in awe of the graphics and things we could do in it. In GTA 5 the story seems to be on a serious line with the main character having mid-life crisis and the other characters showing family issues. While it is always interesting to have a storyline with believable characters, having a 'too realistic' story detaches us from having fun in a fantasy scenario. Imagine having a bad day at work, then coming home to play a video game in which the main character also is having a bad day at work. Sounds fun right? No..

Multiplayer: Seems very ambitious and amazing from all the advertising Rockstar has done for it. It will be very interesting to see how it all plays out. It is worth noting that on the PS3 multiplayer is free without the need for PS Plus.

To conclude I am worried that the game might take itself too serious for its own good. However, this will not discourage me from playing it at all. After obtaining a copy of the game I hope all my doubts will be eradicated and the game will be a fun game to play with great replay value.
Labels: Action First Impressions PS3 Reviews