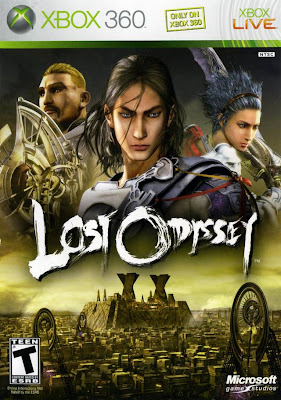 Lost Odyssey is a J-RPG (japanese role playing game) released on the Xbox 360 system. With the involvement of famous Hironobu Sakaguchi (creator of the Final Fantasy series), this game sets the bar high for turn based role playing games.
Seeing as it has the magical touch from Hironobu Sakaguchi, the game features all the similar things that a Final Fantasy game would include.

The main character of the story is Kaim, an immortal who has lost his memories. Kaim meets other immortals who have also lost their memories and together they try to unravel the mystery behind it all. He also meets mortals who join up and form a party in which they adventure through various lands. We quickly learn at the beginning that the evil character in this game, Gangora, is plotting to destroy the world and gain vast amounts of power in the process. It is then up to Kaim and his gang of travelers to try and stop Gangora.

The story in this game is told through various means. It is mainly told through cutscenes (ingame and FMVs), as well as dream sequences. Dream sequences are when the immortal characters remember fragments of their past and have dreams which tells them a little more about their story. The dreams are told in text fashion where text appears slowly on the screen with nice sound effects and touching music.

The music throughout the game is astonishing. From the start until the end, the music plays a key role in making the game a more epic experience. Each city, each battle, and each cutscene features a remarkable music score which really sets the tone within the game.

Graphically the game is very beautiful. For a game that was produced in 2008, it still holds up till this date in terms of graphics and visual attraction. Each cutscene features a sharp graphical display of rendered CGI. There are couple of spots where the game has blurring but that is not noticed much especially when we are in the heat of battle.

The battle system used in this game is turn-based. Meaning that each move an enemy or player makes happens after another move and never at the same time. Just think of Final Fantasy 7 and you will know what the expect from this game as well.

There are two main drawbacks to Lost Odyssey which many have complained about in the past. The first thing is that the battles in the game can stretch for too long. Even when fighting normal monsters it can sometimes feel a lot of time is getting wasted when we could be focusing on the main story. Sometimes you will find yourself stuck in a battle or even lose the battle, which feels strange as this is expected normally in boss battles.

The second drawback is the puzzles in the game. There are times during the game when we are not fighting where we have to solve mini puzzles to proceed to the next part of the game. Things such as going back and forth from one end of the area to another and turning valves to open the main gate. After some trial and error this can be overcome, albeit a lot of time is put into it, but the battles are what causes the game to lose some of its enjoyment.

Puzzles aside, the game requires us to grind to be at the correct level cap to fight the monsters. This is not the type of game where you can whiz past to the end without doing a fair bit of battling along the way. This however is expected in most J-RPGs, so it is of no surprise to us that it happens in this game as well.

Another annoying part of the battles is the randomness. Often times you will expect your character to perform a spell or skill but it will miss, giving the enemy an advantage that can cost you the faith of the entire battle. If you are over-leveled this should not be an issue, so we recommend a bit of grinding along the way. There are areas in the game where you can save and reset the game and keep battling spawned enemies until you are leveled accordingly.

The two type of character classes in the game are melee (close combat) and casters (distant combat). Similar to other RPGs we can play as swordsmen who can get close to the enemy and perform their primary skill based attacks, and then mage type classes who cast spells from a distance. Generally the mage type classes are weak in terms of armor so the melee classes have to stay in front in the party formation. There is also a hunter based class but we see this much later on in the game.

It is to be noted that this game is a Xbox 360 exclusive and comes on 4 discs. For the best experience we recommend installing each disc on the system before playing. You will still be required to insert each disc to play the game.

Overall Lost Odyssey is a very good game. If you are a fan of RPGs like the Final Fantasy games and enjoy good storyline based games, then Lost Odyssey is highly recommended!