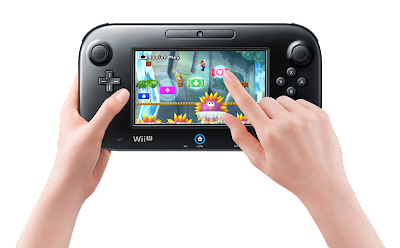 One of the main selling points for the Wii U has been its gamepad. Half controller and half touch-screen, we will take a deeper look at the gamepad to see what all the fuss is about.


The first thing we noticed when we took the thing out of the box was that it was quite light. One would imagine a controller as big as this to be on the slightly heavy side but to our surprise that was not the case. The gamepad feels really comfortable to hold almost as if our hands belong on it. The back texture is smooth and the top texture its glossy, giving us the grip we need to avoid it slipping out of our hands. The triggers are digital but feel good when pressed. Pushing those trigger buttons during games is a different story especially when playing first person shooters, but nonetheless it feels good when pressing them.

The A,B,X,Y buttons felt slightly on the cheaper side but are common with the other Nintendo line ups such as the DS and 3DS. We were hoping for them to be slightly bigger as well but they do the job so we can't complain (much).

The analog sticks feel good when moved around. One thing we did notice was they had reduced tension on them. Comparing the analog sticks to that of the Xbox 360 controller and the 3DS, the gamepad's analogs were more loose which raised eyebrows slightly especially if precision is what everyone is aiming for these days. When tested in various games the analog sticks performed good.

The D-pad on the gamepad looks and feels like the classic nintendo D-pad. The buttons are big but sometimes due to its raised nature can feel more elevated than required. This factor should be taken into consideration when playing fighting games on the gamepad. 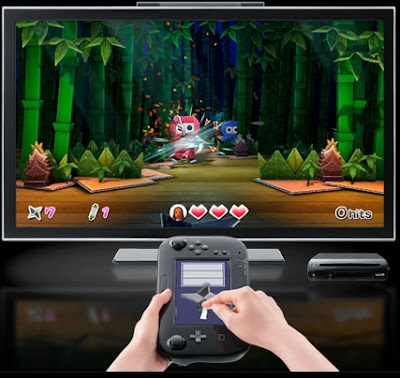 When its not busy being a regular controller, the Wii U gamepad offers a lot more things which are really handy. It features a camera on top, NFC support (if ever we will get something that uses it), dual speakers with volume controller slider and the ability to use it a remote control for our televisions. The television remote is very handy indeed. With the gamepad we are giving the ability to not only turn our television on and off but we can also adjust the volume as well as select the input source (HDMI, Composite, Component, etc). If you ever run into the situation where you are unable to locate your television remote control, then fear not, the Wii U gamepad will help you. On first-time launch you are given the option to tune the gamepad to your selected television and if you own a known brand (Samsung, Sony, LG) you should not have any problems setting it up.

It should also be noted that the speakers on the Wii U are very decent. When turned to the max it truly feels as if we are hearing the sound and music in surround sound. Playing the Rayman Legends demo felt really good with speakers turn up full on the gamepad.

The touch screen on the gamepad also is quite interesting. Being 6.2 inches the touch screen gives us enough room to navigate on. Although it does not feel up to the capacitive levels of the iPhone touch-screen, it still feels responsive enough to use without the stylus (which is also included on the gamepad at the back - thank you Nintendo!).

One of the main issues that gets raised alot on the internet is that there are not many games that are making full use of the gamepad. Some have even gone to say that they would prefer a revised Wii U console without the gamepad (maybe they would like a Wii HD?). Anyway, the fact is true to some extent that the Wii U could use some more game integration with the gamepad. At the moment there are 2 things that come to mind with regard to the touch screen. First would be having an on screen inventory management for most games. RPG fans would find this very useful indeed. Second would be to have an on-screen map, and by on-screen we mean a fully fledged map that we can pause the game and take our time to navigate through. Some games have gone the other route and started placing the mini-map on the gamepad's touchscreen, which is fine if the player is not using it much during gameplay but some games rely heavily on the player's need to look at react at the mini-map so game developers should focus on putting a static scrollable map on there instead with zoom functions if possible (Google maps anyone?).

The Wii U is a new console and we are still seeing games being developed for it. So far there have been a couple of games that have fully taken advantage of the gamepad such as Zombi-U but we need to see more games make use of its full potential to really make the Wii U stand out from the rest.

Overall the Wii U gamepad is a nice addition to the console and really gives us options which we should welcome seeing as these options are absent from other console developers. If you are thinking of purchasing a Wii U or are unsure then rest assured, the gamepad is definitely a welcome addition.
Labels: Reviews Wii U