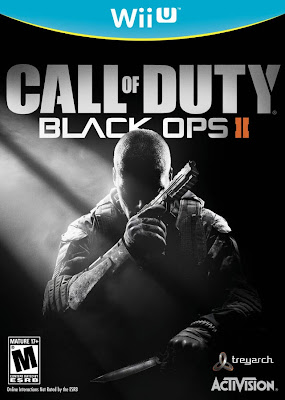 Call of Duty Black Ops 2 is a multi-platform game that has found its way onto the Wii U system. Apart from 007 Legends , not a lot of shooters have been out on the Wii U this year. With the Wii U's gamepad being able to offer unique experiences, we take a look at just how unique our experience with this game can be.

Lets start off with the controls. The game can be played using most of the Wii U's peripheral database. The game can be played using the Gamepad (obviously), Wii U Pro Controller, Wiimote/nunchuk and the Wii classic controller (if that is the way you want to go). I found the gamepad just fine however the Wii U's Pro controller felt too sensitive in terms of aiming but with a bit of alterations in the options menu this can be overcome. Using the Wiimote/nunchuk option is fine too, but the major drawback is the aiming. Either the game was not properly optimized for the wiimote aiming or I was playing it the wrong way. Either way it was not a total enjoyable experience using the wiimote/nunchuk.

I will explain why I started off with the controls first. Mainly because this port of the game really does give us a unique experience!  We are given two different options of the playing the game, which no other console right now can offer us. Firstly we have the option to play the entire game on the Wii U gamepad. For those of us that have no access to our televisions for whatever reason this can be a huge advantage, sort of like playing a handheld game but with better graphics. The Wii U gamepad's screen in this instance was not the sharpest thing to look at but nevertheless still the option was there. This brings us to the second option which is the ability for 2 players to play the game on the same machine in the same room. The way is simple, one player plays on the gamepad's screen, while the other plays on the television using the Pro Controller. No more split-screens or wondering which side of the television screen belongs to which player.

Graphically the game is very nice. Playing this on the Wii U using the HDMI cable was nothing but a pleasure to look at. The storyline however is very generic. Normally we do not expect heart-warming stories when it comes to first person shooters but this storyline felt very stale and uninteresting. You can expect various flashbacks and back-tracking events trying to figure out how the situation in the current time has come to be that way.

The lack of decent story is compensated heavily by giving us multiplayer options. The good thing about the Wii U is its free online multiplayer options. Meaning if you buy the console you won't have to pay a monthly subscription just to play online games. I played a few rounds of team deathmatch. After seeing the Airport level more than often, I quickly got into the game and it felt like any other Call of Duty multiplayer (which is a good thing). There are many more multiplayer modes which the game offers and will be reminiscent to Call of Duty veterans.

The game also features other modes such as a Zombies mode, where you can take down hordes of zombies within the Call of Duty universe. Normally this type of option comes as a DLC but with the Wii U version it is all bundled to give us that 'Limited edition' feeling straight out of the box.

Overall Call of Duty Black Ops 2 is a great port on the Wii U, and is highly recommended especially if you need your daily multiplayer fix of shooters on the console.
Labels: Reviews Shooter Wii U