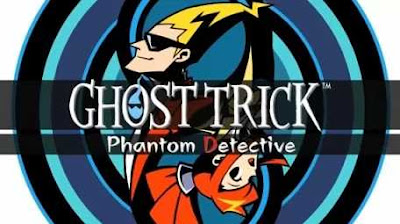 Made by the same creator who brought us the Phoenix Wright series on the DS, this game has the similar kind of vibe going for it but instead of courtrooms and objections, it features ghosts and tricks!

Being available in HD on the iPad this game makes a fine port of the original. I had played this game for the first time on the iPad mini and could not put it down for a second.

The main character in the game is Sissel, a slick male character who has a Johnny bravo hair style going on and wears a smart red suit. Sissel wakes to find that he is a ghost who has lost his memory and soon finds out he was killed and wants to get his body back. The only way he can really find out what went down the night of his murder is for him to manipulate objects in his ghost form and rewind time. Not everyone who gets killed in this game becomes a ghost that can do these things in ghost form or 'tricks' as the game suggests. Sissel has special powers which grants him these abilities. We later find out as to how Sissel obtained these special powers in the first place. He meets other ghosts down the line who are also like him but some of them do not use their powers to do good things. For example to fully find out his past Sissel decides to help people, even if they are killed, he manages to reverse time and save them via object manipulation so they can live to see another day. Sissel bumps into a female detective named Lynne who he agrees to work with to help her solve a crime that will also help him get some answers.

The game is played using the touch screen on iOS devices (ipad, iphone) and all actions are done with the touch of a screen. There is not much control over the character apart from when we can get to do tricks and go into ghost form. Going into ghost form and doing tricks on objects is similar to solving puzzles by using trial and error and using your judgement to grasp the current scene and what can be done for the game to advance.

The difficulty in this game is quite easy and with a little bit of trial and error one can progress quickly to the next part in the game. Towards end of the last few chapters the game can get a little challenging as to what we are supposed to do in order to proceed but as mentioned before the main keyword here is 'trial and error'. Similar to the Phoenix Wright games this has in-game dialogues. A lot of dialogue. This should not discourage anyone from playing this game however, as it is the intriguing story-line that makes this game one of the best games on an iPad.

Players will be told the main plot of the game through 2D cutscenes and dialogue text. Each character introduced in this game is so unique that you will fall in love with all of them, no matter how quirky or strange they will seem at first. Just wait until you reach the prison area of the game and you will immediately understand what is meant by quirky and strange. From start to finish Ghost Trick offers a very engaging story and fine puzzle solving elements. This game is definitely worth checking out if you own an iPad and enjoy puzzle games with amazing storylines.
Labels: iOS Puzzle Reviews